History of the Henderson Club
By Alison Childs and Neville Rykers

The Henderson Squash Rackets Club was officially opened by the then Mayor of Henderson Mr W F Wilsher, at the end of July, 1960, during the North Island Championships, but a tremendous amount of thought and hard work had been expended for some years before that momentous occasion.

From a dream in the mid-fifties by Tom Childs and Phil Jones, the Club came into being in November 1957, with a steering committee comprised of Tom, Phil, Jean Scott as Secretary and Henderson businessmen Max Wiltshire, Mac Williams and Wilf Peck.

The athletic Club in Rata Street, agreed to lease some of its land to the squash club, the project blossomed, one hundred foundation members were soon found, debentures sold, and construction finally got under way in February 1959.  It had been intended that only two courts would be built, but a visit to the new Hamilton Club altered that idea, and a dozen or more enthusiastic members spent many weekends erecting three courts plus facilities, with some women members providing the necessary sustenance.

Finally in September of that year, the “Barn” as it was affectionately known at that stage, opened its doors and courts to the touring British Men’s Team.  There was still a tremendous amount to be done, but members felt that they had a real club, and enthusiasm was high.

From that day to this, so much has happened; so many people have been involved, that it would take a book to chronicle everything.  Many of the found members joined only to get the club on its feet, and played little themselves, if at all.  When you consider that there were very few people in Henderson who had even heard of the game, the present club owes a great deal both to the original committee’s endeavors and dedication, and to the community spirit of Henderson. Some of the original members were also debenture holders, some personally guaranteed the bank loan, others worked tirelessly on the working bees, and served on the numerous committees.  Mac Williams was the first Patron of the club followed by David Corban. There have been five Presidents, Tom Childs from the club’s inception until 1966, when Neville Rykers took over the reins, followed by Stan Tounce in 1970, Syd Hanham in 1972 and Ron Fly.  All have given good leadership over the busy years, assisted by committees of enthusiastic, hard working players/administrators.  Long may this facet of our clubs structure continue.

The club expanded its facilities over the next years in various stages. “Air Space’ was leased, and the lounge cantilevered out over the Athletic Club grounds.  Then a further court was added, plus gallery, and a pleasant entrance-way foyer, the dressing rooms were extended, and a small supper room built over the foyer.  We certainly had a club of which to be proud.

But a club is strong not only because of its administrators, but also because of the caliber of its players, and Henderson has had, still has and surely will continue to have, players of distinction.  Megan and Charlie Waugh were members for a few years, Dot and Bill Deacon from Australia.  Shane O’Dwyer and Jocelyn Childs, while Neven Barbour has been a member since he started playing squash, Pat Taylor came up from Hamilton and Trevor Colyer from Timaru several years ago.

Many world class players have competed in club tournaments over the years.  The year 1961 saw the beginning of the seventeen year association with the Corban family, who generously sponsored until last year the first-ever in New Zealand Invitation tournament.  Heather McKay (Blundell) and Trevor Quick were the first overseas players invited, both juniors at that time.  Heather had just won her first Australian title, and 1961 was the start of this remarkable woman’s squash career.  All top NZ players will have completed at some stage in this prestige event.  Overseas players have included Geoff Hunt, Jonah Barrington, Ken Hiscoe, Cam Nancarrow, Michael Donnelly, Owen Parmenter, Raynor Ratinac, Tyson Burgess, Jenny Irving, Dot Linde, Marion Hawcroft and Jean Walker, while touring teams from Australia and India have also been welcome competitors.

Another important tournament was added to the squash calendar in 1964 (the same year the club hosted the NZ Championships) – the Henderson Open, marking the opening of the fourth court.  MacWilliams and Max Wiltshire continued their interest by sponsoring overseas players from some years, followed by Charles Norcross and other Henderson businessmen, with Leopard Breweries becoming a main sponsor in later years.

Again a wealth of talent graced the courts – our top NZ players, and from overseas, outstanding players such as Aftab Jawaid, Pakistan; Ted Hamiliton, Doug Stephenson, both from Australia, Dardir, plus Nancarrow, Carter, Burgess and Ratinac.  What exciting squash we have been privileged to see.

On the home front, Henderson members have won a number of major national titles – Neven Barbour, twice NZ Champion, Megan Waugh in 1967, Charlie Waugh, five times, though not as a member of our club; Dot Decan in 1964; and Shane Kennedy in junior events.  The Club has won the Cousins Shield three times, and the Mitchell Cup twice and has had successes in various National Teams Competition Finals.

As so we come to the present day.  Some years ago, the Club seeing the need for expansion and diversification, bought 61/2 acres of land in Buscomb Avenue, but it took many years of negotiations by our administrators before the agreement with Council was finally reached, and the project under way.

From the time the club purchased the land in Buscomb Avenue the days of the old Ratanui Street building were numbered and the first step towards building new premises was taken when a young architect, Steve Grant, offered to do a scheme plan as his thesis for his final year of training.  The club was impressed with his design and the basic layout and form which he presented was used to prepare working drawings.  The second step was taken when the Henderson Borough Council offered to purchase the Ratanui Street building and an agreement was quickly reached.  We are very grateful for the Council’s generosity in giving us a two year period of continued tenure of the old building after the sale was concluded.  Without this help we could not have kept the Club functioning and constructed the new building at the same time.

The third step presented difficulties because it is all very well to have a building site and a set of plans but also need is enough money.  An energetic finance sub-committee was formed and due to their efforts a mortgage was offered by the Bank of New Zealand.  We are grateful for their consideration and help.

With the money obtained from the sale of the old building, money raised by club members and the mortgage finance we had a total of $365,000.  A large sum but not nearly large enough for the building we were determined to have.The estimate of cost in January 1978 was $464,000 leaving a short fall of nearly $100,000.  a building sub-committee was formed and a recommendation was made that the club become a construction firm for the period of building and that use be made of voluntary labour and the expertise of various club members.

The fourth and final step was taken when a building foreman and carpenter were hired and in April 1978 work commenced.  Material were donated or charged at discount rates by many firms and Club members gave freely of their labour and expertise.  Because of the use of voluntary labour the contract period was considerably longer than normal, taking in all 16 months.

However, it now seems that it was all worth while as the following figures will show:

Estimate of cost August 1979 including works addedDuring construction and allowance for inflation | $524,000

Every club member who was connected with this project  can indeed be proud of our achievement and I am sure that we will not stop at this point and that further amenities will be added progressively at our beautiful site by the stream in Buscombe Avenue. 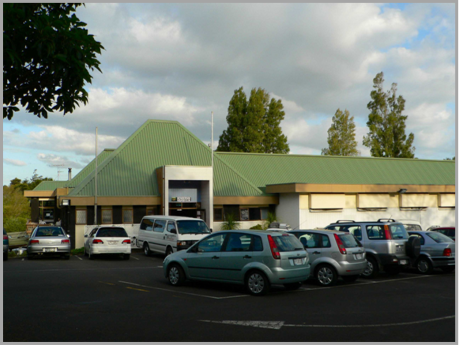